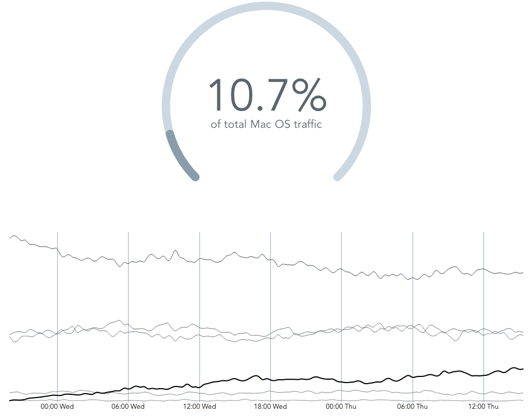 Mac OS X Mavericks, the new desktop operating system by Apple, was released on Tuesday amongst much hype. One of the biggest surprises of the release was that it is now available completely free. GoSquared has been tracking, in real-time (of course!), the number of visitors browsing sites on the GoSquared network that have OS X Mavericks installed. This is how the Mavericks user base (as a percentage of Mac users) has grown so far:

Interestingly enough, from our data, it seems most people upgrading to the latest operating system are doing so from the previous version of OS X, Mountain Lion. Before the launch, Mountain Lion was responsible for roughly half of all Mac traffic. That’s now dropped to around 40%.

Older Mac operating systems such as Lion, Snow Leopard, Leopard and Tiger have remained relatively unchanged. Whilst it is speculation, it wouldn’t be unreasonable to suggest that those users on Mountain Lion consist of a greater number of early adopters eager to upgrade to the latest version.

Have a different opinion or other thoughts? We would love to hear from you! Let us know at @GoSquared or shoot us an email.