The GoSquared team is a little on the thin side this morning. Those of us who have turned up look completely and utterly burnt out; dead almost. This past weekend we played host to 137 developers, who created 27 fantastically awesome hacks, all at our very own hackathon; London Real-Time.

A little under two months ago we embarked on the spectacularly foolish, but equally brilliant, idea to organise and run our very own hackathon; along with the help of a few close friends in the form of realtime startups. The result was phenominal.

On Friday 13th April at 6pm, a day traditionally believed to be cursed and unlucky, we threw open the doors of White Bear Yard and kicked things off in style. Attendees were greeting by a smiling team, signed in and then toured around the facilities. Then open bar was flowing with beer, gin, whisky, coke, etc and the GoSquared BBQ was on full blast.

Opening talks were given by GoSquared, Pusher, Twilio, Geckoboard and RabbitMQ. The hackers were introduced to the available APIs with a brief explanation of what was on offer; before delving into some serious coding.

On Saturday and Sunday developers spent their time eating amazing food, hacking together awesome apps and putting themselves through sleep deprevation experiments. Everyone worked incredibly hard to have something presentable for the Sunday afternoon judging. Representatives of our API partners were joined by Greg Young, from Passion Capital, and Milo Yiannopoulos, Editor of The Kernel, to judge the best real-time apps.

Prizes were awarded to GoCubed (GoSquared), Tring Tring (Twilio), Shout JS (Pusher), Many Pie Charts (Geckoboard), YouChoose (RabbitMQ) and Coupon Interest (Frankenstein). Each API prize winner was awarded a tablet, of some variety. The winner of the Best Frankenstein app was awarded $1,500 in AWS credit.

All of the hacks have been uploaded to http://hacks.londonrealtime.co.uk – Videos are currently being polished and finished off by Olly Newport, from Keyone Productions, and will be slowly added. Keep your eyes peeled over the coming days for updates.

Although the entire GoSquared team is completely knackered from the event, we’re already plotting and planning a second London Real-Time. Please subscibe to updates at http://londonrealtime.co.uk. 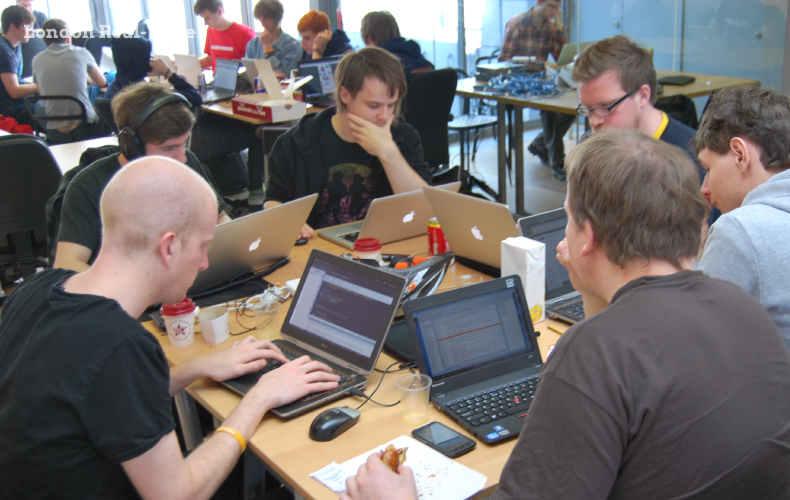 Finally we’d like to thank all of the volunteers, unsung heroes and organisers for London Real-Time. You were fantastic, without you we couldn’t have pulled off such a great event!

You can read more glowing reviews and posts about the weekend’s event here:

The Next Web, Friday: – http://thenextweb.com/uk/2012/04/14/london-real-time-hack-weekend-gets-going-to-inspire-new-projects-on-the-fly/

The Next Web, Sunday: – http://thenextweb.com/uk/2012/04/15/london-real-time-hack-event-ends-with-exhausted-and-innovative-winners/

The Kernel, Full wrap up: – http://www.kernelmag.com/scene/1844/an-orgiastic-festival-of-social-awkwardness/