GoSquared supports a number of non-profits with GoSquared for Open Source agreements. Ghost is one of our favourites. We sat down with John O’Nolan to talk about how Ghost are building the future of blogging and to talk about why analytics matter for measuring word of mouth.

How did you get started with Ghost?

I was a contributor to the WordPress design team for a number of years. I had been building blogs for companies for a long time; I was doing everything from travel blogs to food blogs to startups and all sorts. I had a very good idea of how WordPress was used and how the product was evolving. It was moving away from blogging to becoming a full content management system like a Drupal.

Much of the ideas behind Ghost were about making it simpler, more straightforward and focusing on doing one thing very well. I had ideas rolling around in my head and was making lots of notes and sketching ideas. I was thinking, wouldn’t it be nice if you rebuilt WordPress to focus on just blogging. 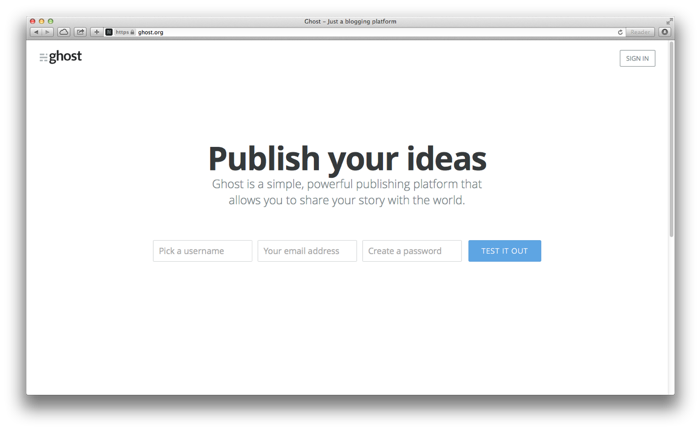 I presented the idea that would become Ghost in a blog post expecting at most a couple of thousand views but instead received an overwhelming response. It was clear that this idea should actually exist. We then tried to make it happen, launched a successful Kickstarter and I’ve been working on it full time for over a year and we’re now a team of five.

Now some of our biggest blogs are Jeff Adwood with Coding Horror or the Inside Envato blog.

What is unique about Ghost?

What our customers love about Ghost is undoubtedly the simplicity and ease of setup. There is little that can break or get in the way.

We find GoSquared most valuable for big PR events. We need to know what is working and what is not.

How do you use GoSquared?

We’ve been using GoSquared since we launched Ghost. We find GoSquared most valuable for big PR events and launches to assess their impact. We need to know if they are working or not. When we do an announcement, product release or big mailshot, GoSquared is the go to place. We crack open the dashboard to see if everything is working, users are going to the right places and navigating through the site in the correct order.

When we launched Ghost, we were watching the graph spike to 5,000 concurrents. That was incredible.

When we use it on a day to day basis, we want to see what parts of the site are trending or to quickly match this week versus last week.

We’ve also added visitor tagging with our use system which is awesome.

We were watching the graph spike to 5,000 concurrents. That was incredible.

What’s most valuable to your team?

With GoSquared, we get a simple, valuable overview in a very short amount of time. With Google Analytics, there is so much there and it’s complicated; it’s hard to get a basic overview of anything so you’re forced to always drill down.

We’ve been able to spot downtime before it happens or see a spike of interest before it’s really huge.

The metrics we follow closely are pageviews and what is getting viewed the most. Site referrals are useful and we’ll find a site pop up there and it turns out they’ve written about us.

It’s also valuable for flagging a problem. We get alerts when there is a jump in the number of people online —or if that’s numbers dropped substantially. We’ve been able to spot downtime before it happens or see a spike of interest before it’s really huge.

What analytics metrics are most important for a blogger?

Everyone is probably different but it’s the basics —they need pageviews and uniques. They don’t need a sophisticated interface, they want something that looks pretty.

What does the future hold for Ghost?

In the next six months, we’ll be shipping multi-user support to go after small business and startup teams. We want to integrate with services like Twitter and Buffer. We’re also working on the Ghost dashboard to introduce analytics to the user. And we want to introduce third party app integrations and have “one click installs” for products like GoSquared.

John O’Nolan is the Founder of Ghost.

Why Everyone Should Start An Email Newsletter

7 Reasons Why Your Emails Go To Spam (With Solutions)

Imagine carefully crafting an email intended for your loyal subscribers. It has everything from persuasive copy to jazzy graphics. Maybe…