Time has flown since our February Hack Day and it’s time for another one! Here’s what we got up to for March…

Visualising all our code

Having joined GoSquared only last year, Ben remembered the difficulty of getting to grips with the various web services and libraries that form the GoSquared infrastructure. Now more familiar with our setup he set to work creating a dependency visualiser that connects to Github, pulling all of our repositories package.json and README.md files in order to build a graphic representation of all of our codebase. 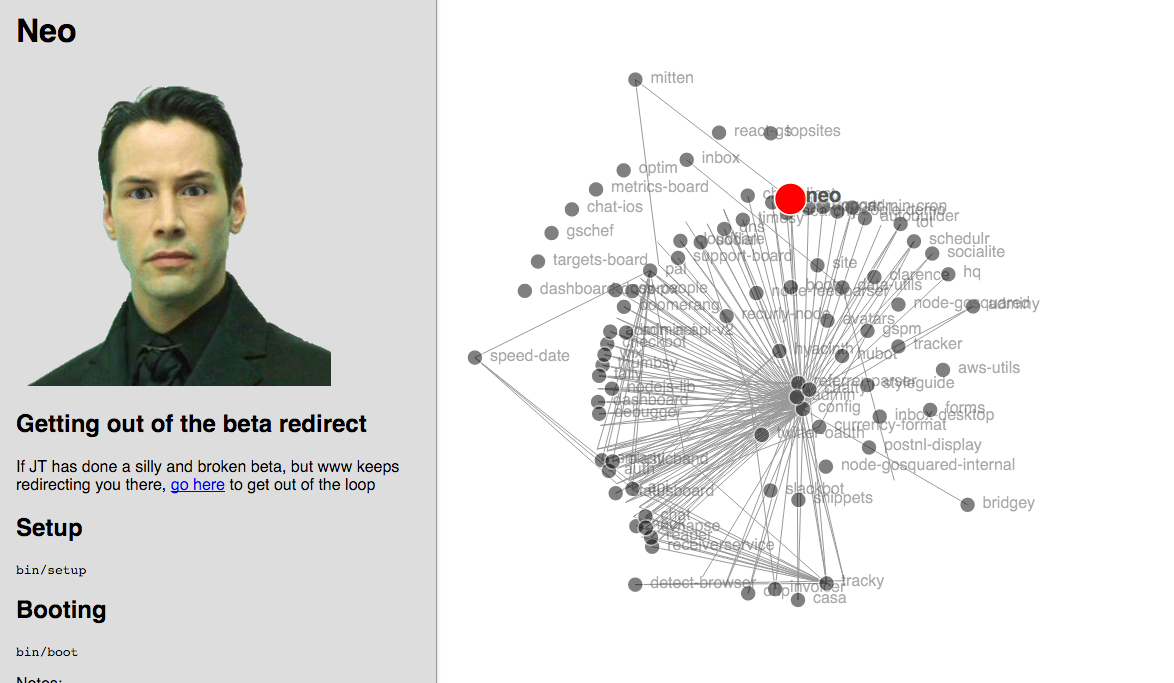 Having got the basic idea working, there is still some work to do to make the visualisation clearer and to see which repos are services, which are libraries, who is working on what etc. Hopefully he’ll be able to polish this off soon and open source it for all to use!

Everything is possible in a few hundred lines of Bash

At GoSquared we’ve been users of Chef for a long time for setting up and configuring our EC2 instances on AWS. However, for the vast majority of scenarios, Chef can be overkill. In true devops style, JT decided that it would be possible to replace our thousands of lines of Chef config with a few hundred lines of Bash scripts.

The resulting project is called Clarence for reasons unbeknownst to mankind, and reduces our total boot time (from a clean instance to fully bootstrapped with running applications) from approximately five minutes to under a minute (most of which is waiting for AWS to provision the instance).

Come chat with GoSquared on Discuss

In an experiment to create a new method of interaction with the community, Geoff worked on “Discuss”. As the name suggests, Discuss is a discussion board where the community can share knowledge and tips about the latest tools and techniques for data collection, analytics and customer communication. It’s over at discuss.gosquared.com if you want to try it out and give us a shout.

Hackdays are great for getting prototypes out the door, we’re always amazed by what can be achieved in a single day. However, sometimes it does reach the end of the day, it’s demo time and you have nothing to show despite all your work.

Hugh did admit that he was being “overly ambitious” with his project; cohort visualisation of data from our own GoSquared People using one of the dashboard service we integrate with Klipfolio. So whilst you might have nothing to show for your hackday when it comes to demo time you should still take part. Talk about what you tried to achieve, how you tried to tackle the problems you encountered, what you learned and what you would have done next. That’s the interesting part.

How to write a chatbot better than Microsoft

You may have noticed over the past few weeks we’ve offered the ability to get in touch with us for support and questions through the chat button in the bottom right corner of the GoSquared site and apps. Ed wanted to see if we could be smarter about the replies we offer and so spent the day exploring automatic responses to chat messages. 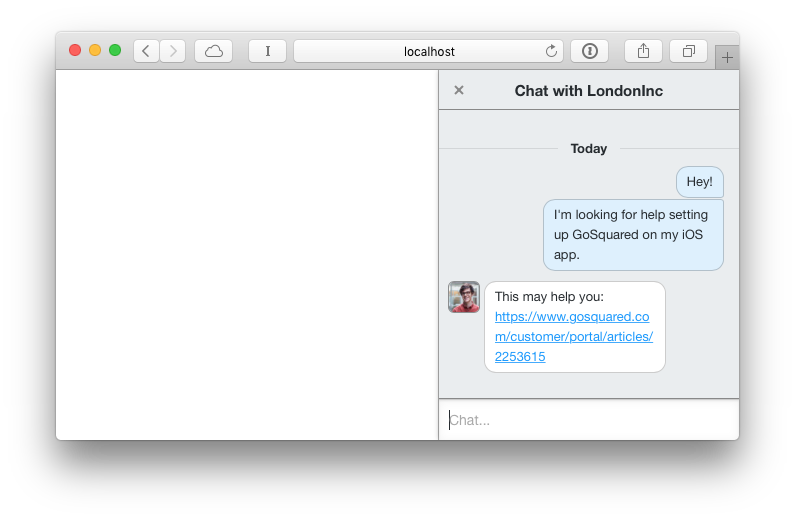 For example, if you began a conversation asking for help installing GoSquared for your iOS app, our support site would be checked, and a link to a relevant support document would be sent in response. Frequently asked questions can be addressed in seconds and without involvement from a support team memeber — particularly useful when you’re not able to provide support 24/7.